Summary:
Hhhhhhhhhhhhhgggggggggguuuuuuuuuuuuuuuu i did not get much done this week eeeeeegggghhhhhhhhh. . .
Ok so,, this week I had my first proper brain lock-up and hit a full roadblock and I think maybe burnt myself out, a little. I've been working on this since uhh, the beginning of June, and it is now mid-August, so that's about two months of work with no real breaks. Thankfully I have a break coming up in a couple of weeks, but I'm burnt out now so... Anyway, I did manage to squeeze in a couple of fixes today and yesterday after my playtests, and, even though I wasn't doing production work, I was doing a lot of thinking about where I need to go with this now that I have some idea of the general world and mechanical... scaffolding.... stuff. Yeah.

I just wanna mention that even though I'm feeling kinda sad that I didn't get much done this week, it's actually really important to acknowledge when you are too tired or need to take a break. I know that I suffer from being unable to stop working on a problem until it is done, even at the expense of my health and efficiency. I didn't do that this week which is why I didn't get anything done, but I think it was the right choice because now I'm only tired instead of dead.

Take care of yourself, even [especially] when you're working on something you really love.

New Stuff:
No new stuff this week. Only changes and fixes. <3

Changes/Fixes:
I fixed that problem I was talking about last week where the first person camera kept resetting back to neutral, but then when I fixed it, it wouldn't reset back to neutral when it was meant to. Anyway now it works properly so that's good.
I fixed a problem (problem?) where the torches/spears were getting stuck inside each other if one spear hit another. Now they ignore each other so they can't get stuck together (I felt so smart fixing this cos I knew exactly off the top of my head where the problem was in the code, and I went in, and I wrote like, half a line, and it just freakin worked first time I felt so powerful).

After doing playtests this week I noticed that people were still having a hard time working out whether gears had been selected even tho the gears get huge and spin around. LOL. So I added a sound queue to indicate when a gear has been selected. The sound changes in pitch depending on the gear (low for first gear, then going up in pitch for each subsequent gear). Hopefully this will help.
I'm still not 100% convinced about how loud the sound should be, or how different each pitch should be (should it be weird and dissonant or should it be clean and friendly?) but that's all stuff I'll work out later.

Coming Soon:
I guess this section is ultimately mostly the same as last week, because not a lot has been added.
I'm still considering that bus system from last week. I'm pretty sold on it but I'm still trying to work out how I will implement it, and how much of that implementation I actually want to divulge in these logs (it's getting to the point where I might actually leave stuff out intentionally, to keep up the mystery).

Thoughts:
Gah! So tired. But it's ok. I'm taking care of myself. Hopefully next week I'll be feeling up to a more regular workload. I think a big part of my hang-up this week was due to suddenly being unsure about my design direction; trying to resolve the conflict between making something that people can play, and trying to make something that is impartial to their enjoyment(?). I've recently been confronted by the ethics of making a game where the player's actions and wants are always prioritised, and always need to be graded and rewarded and responded to, and how that kind of design reinforces player entitlement, something which this industry is already suffering for. Thinking about this really made me worry about how much conventional game design wisdom I wanted to take on board, and how much I actually want to ignore. In retrospect I don't think I was in any great danger of making something that adheres to these practices and reinforces these behaviours, but I'm glad that I'm now working with those concerns in mind.

I'm sorry there aren't any pretty graphics in this week's log; I'm too tired. But here's a picture of me holding a dog (his name is Sunny) and wearing my favourite socks (they have submarines on them) to remind you all to take care of yourselves and do nice things every now and then. 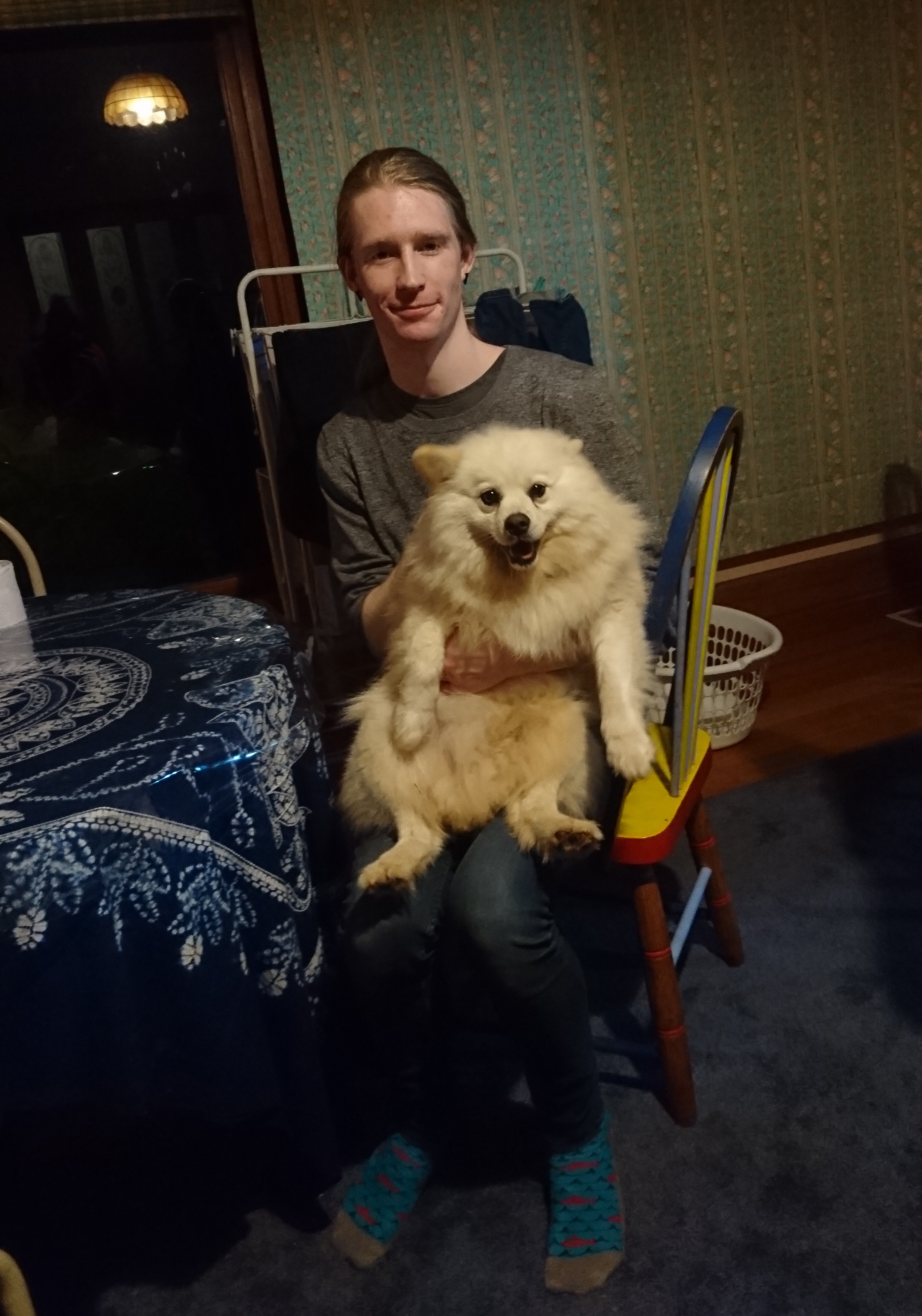 A ghost catches the bus home.